Jaipur is the capital and largest city of the Indian state of Rajasthan. It was founded on 18 November 1727 by Maharaja Sawai Jai Singh II, the ruler of Amber, after whom the city has been named. The city today has a population of 3.1 million. Jaipur is known as the Pink Cityof India.

The city is remarkable among pre-modern Indian cities for the width and regularity of its streets which are laid out into six sectors separated by broad streets 34 m (111 ft) wide. The urban quarters are further divided by networks of gridded streets. Five quarters wrap around the east, south, and west sides of a central palace quarter, with a sixth quarter immediately to the east. The Palace quarter encloses the sprawling Hawa Mahalpalace complex, formal gardens, and a small lake. Nahargarh Fort, which was the residence of the King Sawai Jai Singh II, crowns the hill in the northwest corner of the old city. The observatory, Jantar Mantar, is one of the World Heritage Sites.[2] Included on the Golden Triangle tourist circuit, along with Delhi and Agra, Jaipur is an extremely popular tourist destination in Rajasthan and India. The 2012 British comedy-drama film,The Best Exotic Marigold Hotel was set and filmed in Jaipur.

LocationDistrict JAISALMER is located within a rectangle lying between 26°.4’ –28°.23' North parallel and 69°.20'-72°.42' east meridians. It is the largest district of Rajasthan and one of the largest in the country. The breath (East-West) of the district is 270 Kms and the length (North-South) is 186 Kms. On the present map, district Jaisalmer is bounded on the north by Bikaner, on the west & south-west by Indian boarder, on the south by Barmer and Jodhpur, and on the east by Jodhpur and Bikaner Districts. The length of international boarder attached to District JAISALMER is 471 Kms.
Geographical Limits

JAISALMER District, a part of the Great Indian Thar Desert, is sandy, dry and scorched. The terrain around, within a radius of about 60 kms is stony and rocky. The area is barren, undulating with its famous sand dunes and slopes towards the Indus valley and the Runn of Kutch. The soil here is grateful even to a little rain and turns lush green during mansoon. There is no perennial river in the district. The underground water level is very low. Geographically this district is spread over in 38,401 sq. kms which is one of the largest district and almost equal to the state of Kerala. Joined together, the district of barmer and Jaisalmer is the Largest Parliamentary constituency in India.

Flora & FaunaKhezada, Bavla, Lora, Rohida, Van, Phog, Kumbhar, Jal, Neem, Babul and many other trees are to be found among sparse vegetation. Orchards are luxury and can be seen occasionally in a very rare sport. Grass-beds or lawns are never seen anywhere. Animals perforce have to move from one place to another in search of fodder and water. Sheep, cow, goat, camel,chinkara and wild boar and jackals from the fauna here. Poisonous snakes are common in the desert. The birds of various kinds commonly found in the area are peacock, parrot, pigeon, crow and specially the white Palam birds make the surroundings lively and interesting. The number of great Indian bustards, which were once in abundance in Thar Desert, began to decline fast. In addition to these cocks and hens are domestic birds.

ClimateDistrict JAISALMER has a very dry climate with very hot summer; a cold winter and sparse rains. The climate is extremely hot during summer with maximum temperature reaching up to 49.2 degree celcious and extremely cold during winder with minimum temp. in the range of 1 degree celcious. The variation in temperature from morning to noon and the late midnight is a sudden phenomenon. The average rainfall is only 16.4 cms as against the state average of 57.51 cms.

Udaipur  also known as the City of Lakes, is a city, a Municipal Council and the administrative headquarters of theUdaipur district in the state of Rajasthan in western India. It is located 403 kilometres (250 mi) southwest of the state capital, Jaipur, 248 km (154 mi) west of Kota, and 250 km (155 mi) northeast from Ahmedabad. Udaipur is the historic capital of the kingdom of Mewar in the formerRajputana Agency. The Guhils (Sisodia) clan ruled the Mewar and its capital was shifted from Chittorgarh to Udaipur after founding city of Udaipur by Maharana Uday Singh. The Mewar province became part of Rajasthan after India became independent

Apart from its history, culture, and scenic locations, it is also known for its Rajput-era palaces. The Lake Palace, for instance, covers an entire island in the Pichola Lake. Many of the palaces have been converted into luxury hotels. It is often called the "Venice of the East", and is also nicknamed the "Lake City".[2][3] Lake Pichola, Fateh Sagar Lake, Udai Sagar and Swaroop Sagar in this city are considered some of the most beautiful lakes in the state.

Jodhpur (Rajasthani: जोधपुर),is the second largest city in the Indian state of Rajasthan. It is located 335 kilometres (208 mi) west from the state capital, Jaipur and 200 kilometres (124 mi) from the city of Ajmer. It was formerly the seat of a princely state of the same name, the capital of the kingdom known as Marwar. Jodhpur is a popular tourist destination, featuring many palaces, forts andtemples, set in the stark landscape of the Thar desert.

The city is known as the "Sun City" for the bright, sunny weather it enjoys all year. It is also referred to as the "Blue City" due to the vivid blue-painted houses around the Mehrangarh Fort. The old city circles the fort and is bounded by a wall with several gates. However, the city has expanded greatly outside the wall over the past several decades. Jodhpur lies near the geographic centre of Rajasthan state, which makes it a convenient base for travel in a region much frequented by tourists. 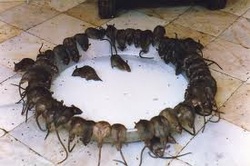 Bikaner (Hindi: बीकानेर, Urdu: بِيكانير‎), ( pronunciation (help·info)) is a city in the northwest of the state of Rajasthan in northern India. It is located 330 kilometres (205 mi) northwest of the state capital, Jaipur. Bikaner city is the administrative headquarters of Bikaner District and Bikaner division. It was formerly the capital of the princely state of Bikaner. The city was founded by Rao Bika. Bikaner.[1][2][3] in 1486 and from its small origins it has developed into the fifth largest city in Rajasthan. The Ganges Canal, completed in 1928, and the Indira Gandhi Canal, completed in 1987, have allowed the farming of crops such as mustard, cotton, groundnuts, wheat and vegetables. Other industries include wool production and the mining of Gypsum, plaster of Paris and bentonite.

Bikaner is famous for sweets and snacks (or namkeens in Hindi). 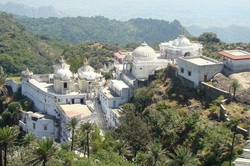 Mount Abu is a popular hill station in the Aravalli Range in Sirohi district of Rajasthan state in western India near the border with Gujarat. The mountain forms a distinct rocky plateau 22 km long by 9 km wide. The highest peak on the mountain is Guru Shikhar at 1,722 m (5,650 ft) above sea level. It is referred to as 'an oasis in the desert' as its heights are home to rivers, lakes, waterfalls and evergreen forests.